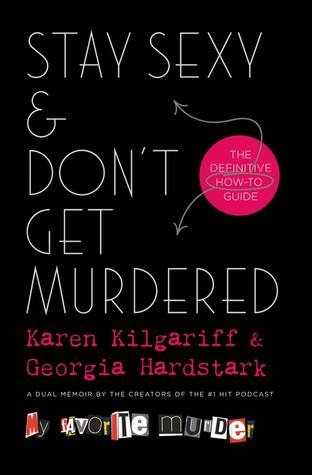 Stay Sexy and Don’t Get Murdered: The Definitive How-To Guide by Karen Kilgariff and Georgia Hardstark

Alright, any fellow murderinos in the crowd? I’m not a long-time fan of My Favorite Murder, but I’ve been an avid listener for the past year. Karen and Georgia’s podcast has been the accompaniment to virtually every car trip and train ride since I discovered it so, needless to say, I cannot wait for their upcoming memoir.

“Sharing never-before-heard stories ranging from their struggles with depression, eating disorders, and addiction, Karen and Georgia irreverently recount their biggest mistakes and deepest fears, reflecting on the formative life events that shaped them into two of the most followed voices in the nation.

In Stay Sexy & Don’t Get Murdered, Karen and Georgia focus on the importance of self-advocating and valuing personal safety over being ‘nice’ or ‘helpful.’ They delve into their own pasts, true crime stories, and beyond to discuss meaningful cultural and societal issues with fierce empathy and unapologetic frankness.” Pub Date: May 28, 2019.

How’s your month been so far? Any really great reads in these first couple weeks of May? Let me know in the comments! Feel free to share your any recent hauls or TBRs below as well 🙂